This summer holiday I have been feeding the children.  They seem to have done nothing but recline on the sofa (while I have been tapping away at the computer), coming into the kitchen to regularly disturb my train of thought, demanding something to eat.  They have drunk gallons of milk.  I have had to send A to the corner shop every day for supplies.  He has discovered that the way to make jelly is not to put it in the kettle, and Sam has experimented with putting frankfurter sausages in the frying pan, the maternal bosom swelling with maternal pride at not only that, but that the Nigella cookbook with the correct recipe was open on the worktop.  They have grown, in independence and stature, before my eyes.

My children have always been on the skinny side.  It took years to get Sam to eat more than pasta and sauce for mains and banana and yoghurt for pudding every day, the more mushy the better, and it seemed the moment that we’d got him eating ‘proper’ food (and taking a sandwich to school for an occasional packed lunch is still a new thing), A took over in the food refusal.  And where A goes, L follows.

And it’s not just the number of things they will eat that has slowly restricted itself, but the amount.  They are far more interested in rushing off to play the moment the hunger pangs have lessened to the slightest degree than cleaning off their plates and loading them in the dishwasher.

There have been times, after I stopped worrying about Sam, that I have really worried about A.  Far more aware of his surroundings, and more generally anxious than his brother, there have been times when I have watched him and wondered at his likeness to a baby bird.  Spindly little arms and legs, knobbly knees and poky elbows that always hit the nerve when they climb on your knee for a cuddle.  A bonny baby and a solid toddler, he soon turned into a skinny schoolboy and I, a concerned mama.

This year I have finally given in to the calls for a packed lunch, at least for my younger two.  Sam enjoys his school dinners, checking the menu on the kitchen wall to see if today will be his favourite.  At his school, where it is so much smaller, meal times are social times, an opportunity to practice social skills as well as those of the knife and fork.  Skills that can be lacking where children grow up in homes too small for a table to eat at.

But the other two, they could no longer bear the waiting, the way that the hot dinner children go in last for dinner, the way he had to run to the cafeteria, leaving any potential friends behind, if he was to stand half a chance of getting something that he actually liked.

Poor A.  He has struggled with the new dinner time arrangements at the secondary school.  There was the day he didn’t realise that if he went to a lunchtime club he needed to get something to eat on the way there.  The day he returned from school, and, with a wobble in his voice, told me that he’d only had a jelly tot and a bit of someone’s Ritz cracker to eat all day was not a high point.  I have now got used to checking his packed lunch when he gets home, too tired to open the garage door and put his bike away, and insist that he eats the rest of it before he does anything else.

And lunch is so late.  Over the years I have been in schools, twenty of them, I have seen lunchtime slip later and later, get smaller and smaller, reduced.  No matter that everyone is too hungry to think by a quarter to twelve, and that includes me.  Sadly, I am not a particularly small person, my waistline bears the evidence of bearing three babies, but even I struggle to go from half past seven to one o’clock without anything to eat, and I had a reasonable breakfast, and for a teacher’s family, we don’t eat particularly early.

I watch my children, reluctantly forcing cereal through sleepy lips and I quash the pangs of guilt I feel as I pass them a packet of crisps to eat at break, because I’d rather they ate something than nothing at all.  I’d rather there was something in there other than the pain of an empty belly that means that all they can think about, all they are aware of is the smell that comes from the school kitchen, the crocodile lines of the younger children making their way to feed the beast that torments them.

I had an interesting conversation with a man from a think tank the other day.  Interesting conversations are something I have on a regular basis; I am lucky in my selection of friends.  But think tanks are not something I have ever had anything to do with before.  We talked about how schools could make a difference to children, how to keep them in school, how to help them to learn and take their steps towards a brighter future.  We talked about hunger.

It isn’t just about breakfast clubs.  It isn’t just about kind teachers spending their pupil premium money on bread and butter.  It’s about time.  The best time for teaching might well be the morning, but is it the best for learning?  Do we do the right thing in extending the morning as far as we possibly can, utilising every morning moment for spelling and grammar and Maths and English, and squeezing the rest into a tiny afternoon?

I look at my children, relaxed and holiday happy; fed.  And you know what I think? 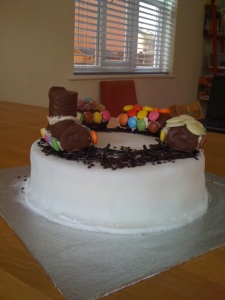 That kettle may never be the same, but it wouldn’t make a very interesting picture, so here’s a cake.